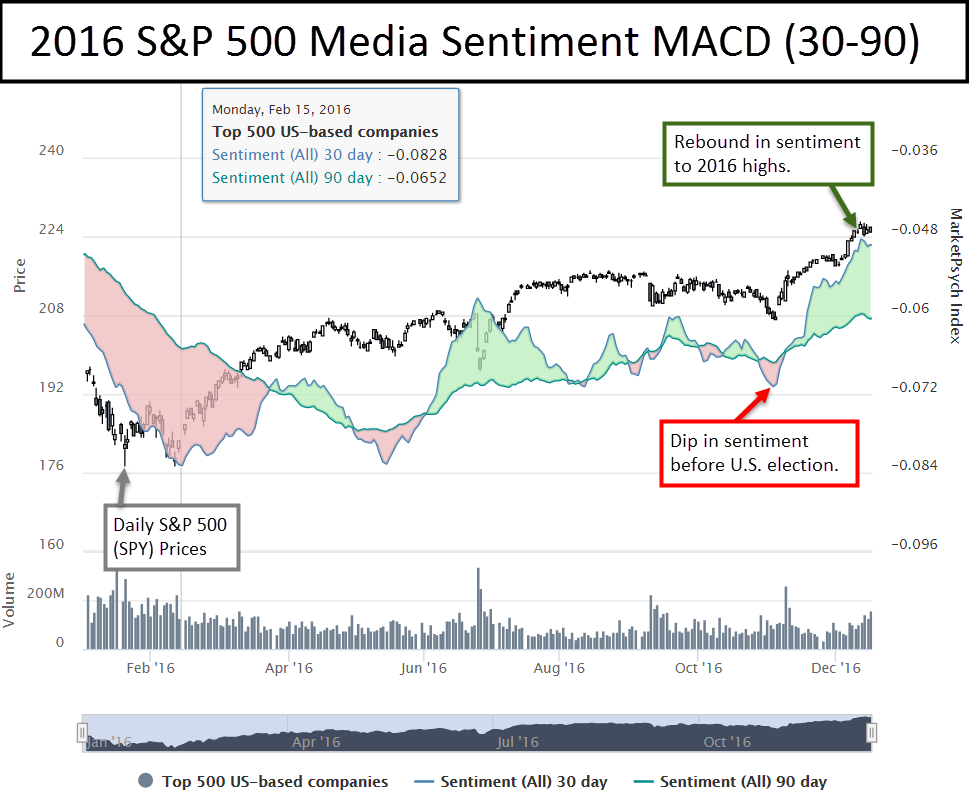 As Brexit before it and the Italian referendum following it, November's U.S. election represents a social turning point. Some believe the light is fading across Western democracies. Others sense renewed engagement after a long period of public passivity. Both camps see this as a pivotal moment in history.

It's not only democratic engagement that's at a turning point. This time of year, across the northern latitudes, nature is growing quiet. Plants and animals have stored away food for the cold months and months of dormancy. When the snow comes, the quiet grows even deeper. During the darkness of winter, last week's solstice marks a turning point in the season. December's holidays symbolize the renewal of life, light, and growth from the depths of darkness.

After the November U.S. elections a rapid shift in media sentiment strongly correlated with the rally in U.S. stock prices, and this was surprising to many market-watchers, who anticipated a large correction if Donald Trump was elected.

Both around strongly felt events and during the dark of winter, the human mind is susceptible to inertia, becomes trapped into believing narratives (E.g., "Trump/Hillary means the end of the world") or ("maybe the light will never return"), and the mind has difficulty shifting perspective. For the seasonal darkness, societies developed light-themed holidays (Diwali, Hanukkah, Christmas, Santa Lucia) to break through inertia during dark days. For individual investors, some top performers use a technique called "reappraisal" to prevent inertia. When predicting market prices, impartial machine learning-based systems are proving to be a valuable tool when the majority of human investors are stuck in a rut.

Today's newsletter examines sentiment shifts around events, the power of machine learning to take advantage of these, and a technique used by top investors to avoid mental inertia.

Although the darkness will continue to lengthen into the solstice this week, light will begin its return on the 22nd. We described a similar reversal phenomenon in market prices in our October newsletter. A sell-off into an uncertain event such as an election typically reverses in the subsequent period. Sometimes prices reverse after the event because the sense of dread and foreboding is gone, replaced by relief that the event has passed. Sometimes prices revert upwards because of growing optimism about business conditions. Probably both of those occurred following the U.S. election, juiced upwards by investors who had sold out in advance to reduce their risk exposure, and now jumped back in out of fear of missing out on the post-election rally.

The following image depicts our financial media-derived sentiment data versus the S&P 500 daily prices this year. From a low point in November before the election, sentiment jumped impressively in the hours following Trump's victory.

Such rapid sentiment reversals are difficult for humans to time accurately. We tend to become absorbed into the story around the events. Such event-inflexibility provides an opening for machine-learning-based predictive models.

As we mentioned in our September newsletter, we've developed such a machine learning based model that makes predictions on the S&P 500, and it was extraordinarily accurate not only in the two weeks around Brexit, but also in the week of the U.S. election and the following week. It was long the day before the election, went short the day of the election through the following opening, and was long over the following week. However, the system is not perfect. It had periods of poor performance in October and so far in December this year - please see disclaimers below. It especially shines around major psychology-driven events such as corrections and referenda.

Our machine learning-based model probably performs so well around uncertain events because it can impartially take advantage of the human biases that blind the majority of traders. While these collective biases can be disabling, some top investors have found ways to reduce the impact of such vulnerabilities via a practice of "perspective-shifting."

In his “Belief in Fallibility" George Soros (1995) explains that to others being wrong is a source of shame. But for him, recognizing his mistakes is a source of pride. Soros explains that realizing that imperfect understanding is the human condition leads to no shame in being wrong, only in failing to correct our mistakes. It requires remarkable courage to consider one's imperfections and mistakes impartially. And evidence suggests that the ability to reappraise one's circumstances is an important tool for reducing common financial biases.

Researchers have found that cognitive reappraisal reduces the impact of loss aversion on decision making (Sokol-Hessner et al, 2009). Reappraisal refers to readjusting one's perspective of a situation along several dimensions. In an experimental condition, researchers randomly asked subjects to think of / review their individual investments in the following contexts:

In aggregate these cognitive reappraisals reduced both physiological reactions to losses (measured via galvanic skin response) and subsequent loss-aversion (biased behavior). According to Sokol-Hessner (2009), “‘perspective-taking,’ uniquely reduced both behavioral loss aversion and arousal to losses relative to gains, largely by influencing arousal to losses.”

In summary, Soros is right. To improve ourselves as investors we must learn from our mistakes, and the best perspective to take is one of curiosity and flexibility. We must shift our perspective from one of "Oh no, another bad mistake!" to "Great, another opportunity to learn!"

When approaching losses, thinking about the loss as:

A routine part of the job of investing
As one of many that one will experience over a typical career, and
As not affecting one's physical life or health, will help normalize the loss and improve subsequent decision making.

We are approaching the dead of winter in the northern climates. The holidays ahead teach us to maintain hope in the darkness and to celebrate the value of persistence as we carry the light forward into the new year.

Despite the impressive results of machine learning in financial markets, the victory of the machines is not yet at hand. Machine learning thrives in environments where humans do not, such as around psychologically fraught events (elections, volatility, etc...). Where humans are inflexible, machines prosper. Taking a larger view, these periods of inflexibility can teach us about our own weaknesses such as our propensity to make mistakes in markets with fast-moving prices or when we believe fixed narratives about how things should be.